Home / Inspiration / The Edit / Spotlight On: The Curtain
Share

Spotlight On: The Curtain

In recent years, C.P. Hart Contracts team have worked alongside some of the most buzzed-about and stylish hotels in the capital – The Laslett, The Ampersand Hotel and the Ham Yard Hotel, to name but a few.

The latest name to join that impressive stable is The Curtain. This new kid on the hotel block features 120 guest bedrooms and six suites with envy-inducing balconies, a showstopper of a rooftop pool and brasserie, eight bars, a seriously kitted-out gym, and even a live performance space. 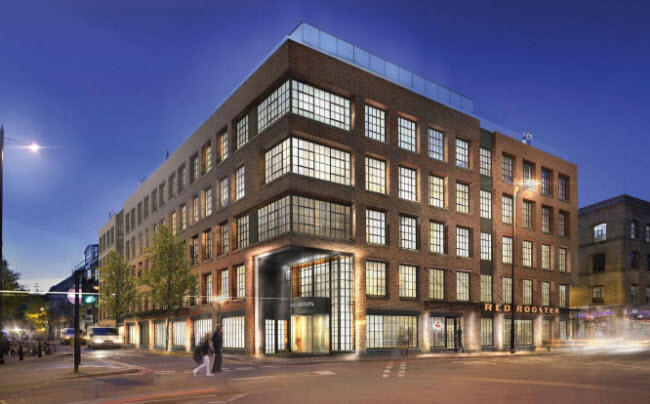 We were treated to a guided tour of the hotel and members’ club by the man behind the eclectic and quirky – yet still undeniably luxurious – interiors, Chris Michero, Creative Director at Texas-based design firm, Design Duncan Miller Ullmann. It goes without saying that we were keen to check out the C.P. Hart-designed bathrooms within the hotel, but being the interior devotees that we are, we jumped at the chance to explore the rest of the space.

What struck us when we first arrived at The Curtain’s Shoreditch location is how effortlessly it fits into its surroundings. It embraces a New York modern industrial feel with an injection of East London cool. It’s clear from the outset that the hotel has been painstakingly and lovingly curated – this shows not only in the decor, but also in the passion for the project that Chris exudes as he makes his way through the series of rooms. It took no less than four years for this project to come together, and the time and effort that has gone into it shines through. 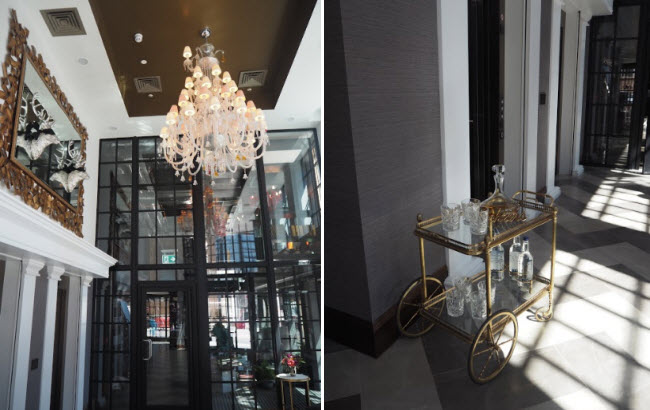 We meet in the reception area, where Crittall-style factory windows area let in an abundance of light into the trendy foyer. And then it’s up to the roof. This sanctuary was designed as a place where creative entrepreneurs, drawn to the vibrant Shoreditch scene, can meet, hang out and feel inspired. There’s a feeling of ‘Mediterranean beach club meets quintessential British lido’, with rattan light fixtures, bistro tables and olive trees mingling with bold striped towels draped over deck chairs and an intricately tiled pool. And it took all of our might not to take a seat and order a Lido Spritzer. 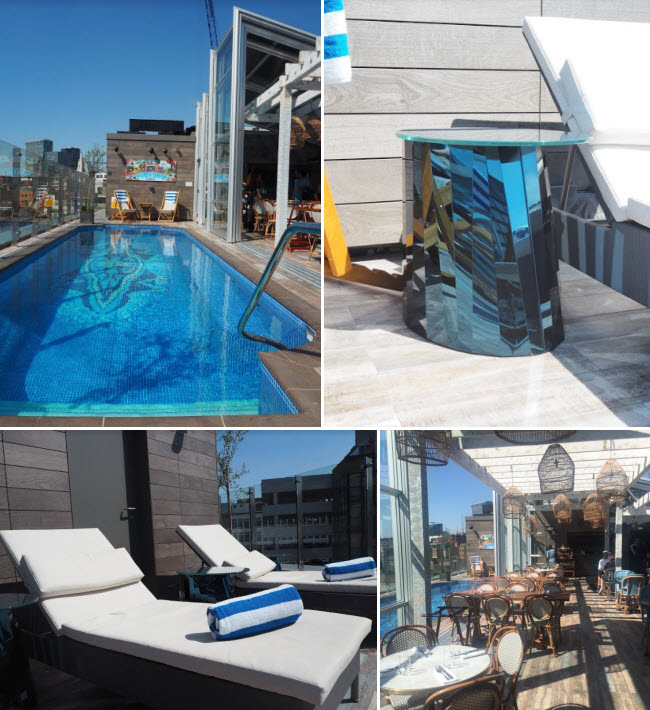 But move on we must. As we made our way back down into the body of The Curtain, we pass the Lido’s WCs, swathed in brightly coloured, preppy wallpaper and full of tactile textures. Timeworn pieces – handpicked by Chris on trips to antiques fairs around the UK and Europe – are peppered throughout the hotel, providing the perfect juxtaposition between old and new. The handsome towel cabinet is a prime example. 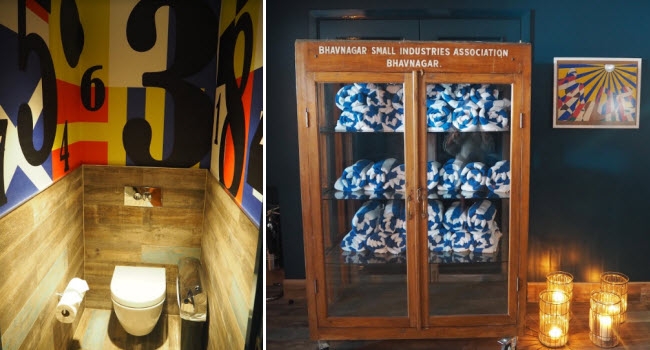 As we pass through the hushed guest room corridors, we admire the doors decorated to look like upscale front doors, with gloss black paint – marine paint, we’re told – and brass knockers. Inside the bedrooms, we’re met by another expertly thought-out mix of styles – exposed brickwork and witty statement artwork by Pete Hawkins provide urban touches, while C.P. Hart’s marble ensuite bathrooms, and crisp white bed linen put the emphasis on luxury. Chris tells us that only European brands were used when sourcing furniture and accessories, and while there’s a definite Manhattan style to the rooms, you still feel like you’re very much on home turf.

Next stop are the eateries: Tienda Roosteria and the hotly anticipated Red Rooster. The former serves up tacos and cocktails until the early hours, while the latter delivers “soul food for the 21st century” that’s right out of Harlem. You get the sense that these spaces are where Chris had the most fun – they’re an explosion of colour and whimsy. Again, various styles intertwine to great effect, and you can’t imagine a better place to tuck into fried chicken with friends, to a soundtrack of live gospel music. And nods to icons like David Bowie keep the British vibe alive. 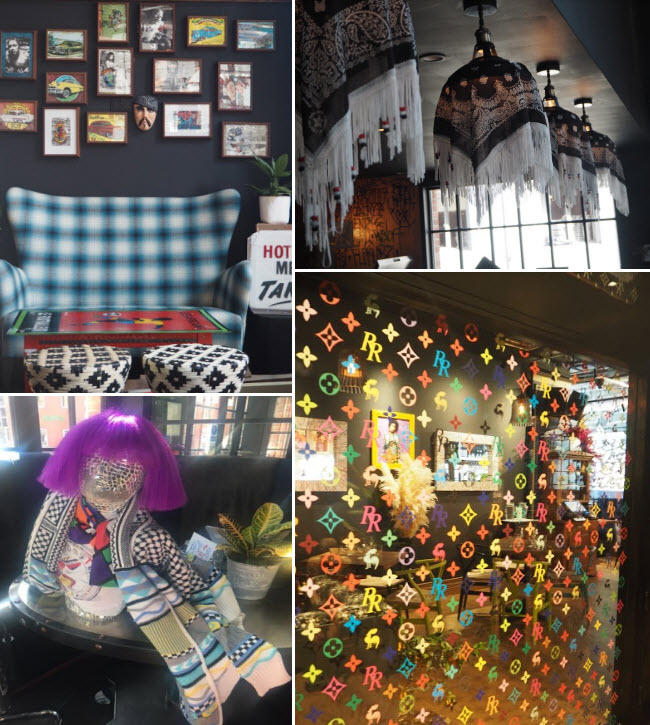 Descending the stairs to the members’ lounge, spa area and gym, and the live performance space, Chris tells us that one of his inspirations was the Mad Hatter’s Tea Party. The outside is brought in with indoor plants and plenty of green accents that are a common theme of the hotel. Meanwhile the spa area is a tranquil retreat where bigger is better, from the eye-shaped mirrors to the sputnik chandeliers. The well-equipped gym is modelled on the one aboard the Titanic, with panelled walls and an antique pommel horse in amongst the modern equipment. And our final port of call, the live performance room, is CBGBs meets Saturday Night Fever. 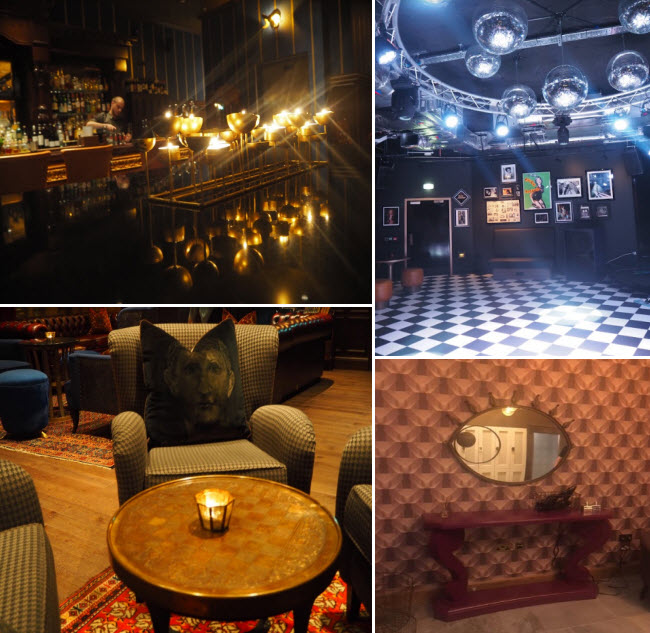 In short, The Curtain is one of the most exciting hotels to land in London in recent years. And it more than lives up to the hype. Our recommendation is to book a table at Red Rooster – but be quick, it’s booking up fast – and make sure you check out the other public areas while you’re there. Your Instagram account will thank you. 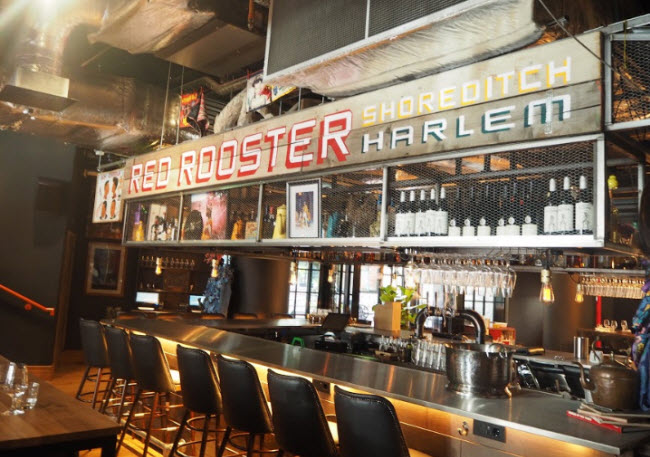